NEW YORK—Twitter CEO Jack Dorsey tweeted today: “Straight blocking of URLs was wrong, and we updated our policy and enforcement to fix. Our goal is to attempt to add context, and now we have capabilities to do that.”

Twitter executive Vijaya Gadde tweeted last night: “Over the last 24 hours, we’ve received feedback (from critical to supportive) about how we enforced our Hacked Materials Policy yesterday. After reflecting on this feedback, we have decided to make changes to the policy and how we enforce it.”

In a Tweet, released early this morning, Gadde said: “We believe that labeling Tweets and empowering people to assess content for themselves better serve the public interest and public conversation. The Hacked Material Policy is being updated to reflect these new enforcement capabilities.”

Twitter is claiming that use of the Hacked Material Policy guided their decision to lock the Twitter accounts of New York Post writers, President Donald Trump, White House Press Secretary Kayleigh McEnany and the GOP House Judiciary—a move that got them “blasted” for censorship by Cristina Tardaguila, International Fact-Checking Network Associate Director who asked the how did both Twitter and Facebook become “arbiters of the truth?

“It seems like Facebook and Twitter have decided to assume the position they’ve been avoiding for so long. Less than a month from Election Day, both companies finally become arbiters of the truth on the internet. Naive, are those who believe this isn’t dangerous.”

The Hacked Materials Policy was not used by Twitter in the sharing of information against President Donald J. Trump (such as his tax returns) but has been selectively applied only to stories that hurt Joe Biden and the Democrats narrative.

The Media Research Center recently found that employees of “both Facebook and Twitter gave over 90 percent of their political contributions to Democrats for the 2020 cycle so far. This came after another recent report showed the overwhelming majority of campaign contributions from employees at big tech firms went to Democratic candidates.

Republican Senators Ted Cruz (Texas), Lindsey Graham (South Carolina), and Josh Hawley (Missouri), who is writing a book on “The Tyranny of Big Tech,” have requested that both Jack Dorsey, Twitter CEO and Mark Zuckerberg, Facebook CEO testify before the Senate Commerce Committee on either Oct. 23 or 28 (dependent on the status of the U.S. Senate on the confirmation of Amy Coney Barrett as a Supreme Court Justice) about censorship.

According to Senator Ted Cruz, we need to find out why Twitter “is abusing their corporate power to silence the press and cover-up allegations of corruption. Twitter and Facebook and Big Tech billionaires don’t get to censor political speech and actively interfere in an election, that’s what they are doing right now.”

“Transparency is essential to the fact-checking community and to the cause of reducing mis and disinformation,” wrote Tardaguila. “The decision to reduce or prevent the distribution of the New York’s Post’s article based on some mysterious, non-transparent criteria and an unknown methodology is a serious mistake. It is a step that brings these companies closer to the slippery slope of censorship.”

The New York Post is the nation’s oldest newspaper, established in 1801 by Federalist and Founding Father Alexander Hamilton. A third Big Tech Company–Wikipedia called the New York Post an “unreliable source” in September in an attempt to explain why numerous conservative news outlets have been either downgraded or banned from their platform, including Breitbart News.

The New York Post story came after emails were obtained from a laptop allegedly belonging to Hunter Biden that show Burisma (an Ukranian energy company) pushing Hunter to help them gain access to his father who was in charge of Ukraine policy under President Barack Obama. The computer was dropped off at a repair shop in Biden’s home state of Delaware in April, 2019 according to the store’s owner.

Twitter’s censorship “sets a bizarre precedent, implying that the company might become an arbiter of journalistic rigor or public interest and derails the conversation around platform accountability,” wrote Atlantic writer Kaitlyn Tiffany yesterday. “It’s hard to see how linking to a news outlet would constitute ‘directly’ distributing hacked content, or how Twitter would apply this interpretation of its own rules consistently. It’s an arbitrary decision.”

Meanwhile, Fox News Tucker Carlson asked yesterday: “Where are the real journalists who make a living by freedom of the press?” The news anchor went on to report on the “cash for influence” Burisma scheme to engage Joe Biden through his son, Hunter. 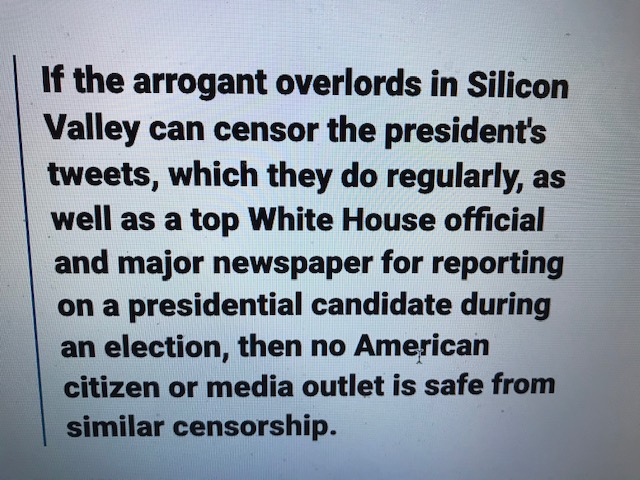