Since that meeting there has been resolution on the labor negotiations which made a small change in the labor expenses. The changes include: 54 unpaid furlough hours, vacation buyback and sick leave incentive temporarily suspended and tuition reimbursement temporarily reduced. There were no layoffs. One position that was budgeted for 12 months was reduced to ten months. The new five year forecast is shown below with the FY 20/21 balanced with caveats and subsequent years negative. Note the RDA bump in 2025/2026 is not included. A structural imbalance exists because the yellow line always exceeds the revenue line, thus requiring a structural change to an underlying operational condition to rectify. 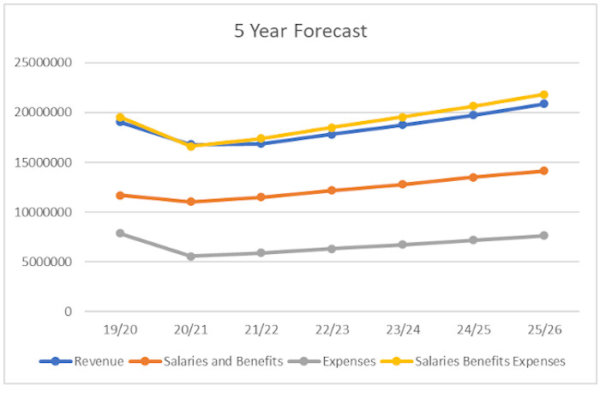 Note, there are no position additions or deletions in this five year period.

The Finance Director presented a list of liabilities. Top on the list was a bill for the mutual aid from the Thomas Fire. The city is looking for federal or state help with this bill. The other fund negatives are issues because the budget calls for “transfers” against these funds, which are already negative. The bond drawdown involves the gas tax. 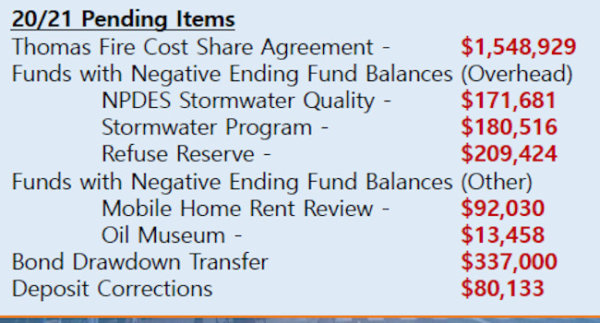 The following pie chart was created from data in the staff report. Pie charts instantly show relative size with respect to other expenses. Note the SPPD receives the largest share of the General Fund. Several speakers and speaker groups submitted comments during the budget about reducing or defunding the police in exchange for social services or housing. 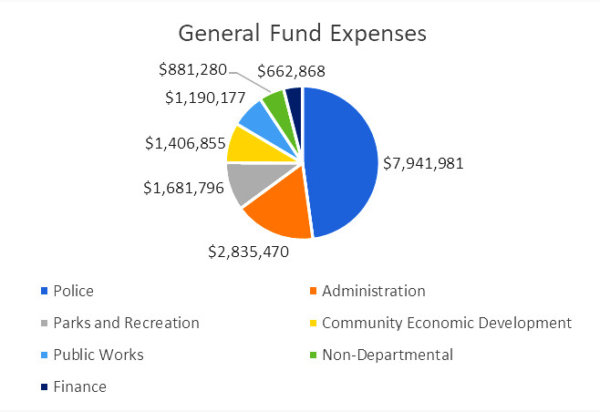 The following pie chart shows General Fund Revenue without detail. Council Member Crosswhite felt the property related should be broken down by secured property tax, VLF swap and other. Not mentioned, but other helpful information would be differentiation between regular sales tax and Measure T sales tax. There were no definitions about contents of “transfers” or “intergovernment” for example. 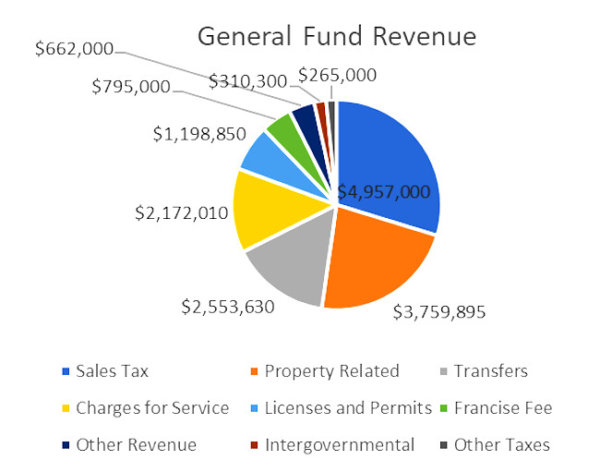 The staff report included a new report showing “sources and uses” of funds but this was not reconciled in the report to the charts.

Two members of Govinvest zoomed into the meeting to explain their software. For a $7,000 license fee, the city could model the expenses due CalPERS for current and retired employees, including the firefighters who were transferred to county fire.

… the State’s adopted budget funnels some federal relief to cities for COVID-related expenses. Our reimbursement will be up to $375,000, which is extremely helpful. We have to demonstrate the costs, so I don’t know yet if we will receive that much back, but it is still a big help….from the City Manager…good news…