SIMI VALLEY—Who is Wayne Fishback?  Why is he in jail?

Wayne Fishback, 75 year-old Simi Valley ranch owner, is locked up indefinitely by Ventura Superior Court Judge Jeffery G. Bennett for “coercive civil” contempt to the Court for his failure to comply with a $21.7 million judgment against him issued in a December, 2014 trial by Ventura County Superior Court Judge Kent M. Kellegrew.

Fishback, claims he has spent nearly $5 million dollars in legal and engineering fees to prove his innocence; no longer can pay for legal counsel; has been refused a public defender; and is homeless—that is before receiving the comforts of a jail cell.

David Cook, Ventura County’s litigation attorney against Wayne Fishback, explained to the Citizens Journal that Fishback can escape jail by one of two things:   “Fix the problem or the judge finds that continued incarceration is futile…and wouldn’t make the person break…six days will not lead to his breaking.

“We hope that Mr. Fishback comes forward with a clean closure plan according to his court order,” said Cook.   “This is not punitive.  He has the keys in his pocket to the jail house door.  He can open up the door any moment.

According to Cook, Fishback needs to come forward and say:  “This is how I intend to remove or relocate (what he has dumped) to a legal dump site and remediate (this situation and) show the County (a county report) signed by a licensed engineer.”  Cook states that the report usually costs $10,000 but Ventura County is willing to negotiate the costs down to $3,500.

“I want him to succeed.  I want him to do what he is suppose to do.  The County wants him to clean up the mess.”

Wayne and wife, Carol Fishback, were 28-year owners of a two-story, five bedroom three bathroom, Simi Valley property on 3106 Calusa Avenue (off Yosemite and one mile north of the 118 Highway) that was foreclosed with an unpaid debt of over $340,000.   The highest bidder (Catamount properties of Redondo Beach) purchased this property at a cost of $680,000 on Feb. 14. 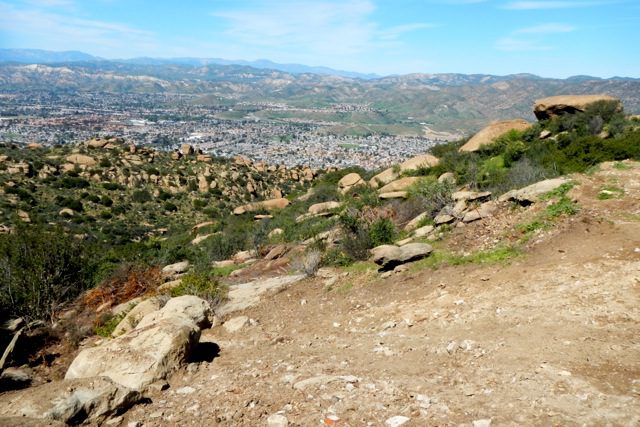 Fishback also owns 120 acres of sprawling prime land ridge-top acres purchased in Simi Valley Hills in 2000 (and an additional 400 acres in Los Angeles County).  Fishback told Citizens Journal reporter Kevin Harris that Ventura County covets “my land…I sit in the middle of the choke point of the wildlife corridor.  This is the only connector that’s left between the Santa Monica Mountains, the Simi Hills, Santa Susana and up to the Los Padres National Forest.  We’re not doing any major development up there.  What I’m interested in, is the ag use of the land.”

Fishback, a design architect until 1993, considers himself a conservationist with a deep interest in recycling.  He has done what other rural property owners do…fill in ravines and gullies to level off parts of the land he bought to make it useable.   Fishback has done this by bringing in thousands of cubic yards of solid construction waste to level his property.

Ventura County claims this solid waste has made his property into an “illegal dump” and Fishback has been fighting a $22 million judgment against him issued in a December, 2014 trial by Ventura County Superior Court Judge Kent M. Kellegrew (who is leaving the bench, Office Number 8, at the end of the year)—the highest figure allowed by law.

(Editor’s Note:  To read the Citizens Journal story on the original court ruling against Wayne Fishback issued in December, 2014 by Superior Court Judge go to story written by Kevin Harris and posted on March 8, 2015:  https://www.citizensjournal.us/fishback-mountain-the-most-beautiful-illegal-dump-in-the-county/.)

Ventura County has claimed that Fishback never acquired the proper permits to place solid fill material on his land and that the fill was bought to location without any official oversight.  Meanwhile, Fishback maintains that he secured legally required permits and that he never needed to get permits to operate a dump, since he doesn’t own or operate a dump.

Fishback claims that all fill materials used on his property were “listed as inert” on the California Integrated Waste Management Listing and that the Los Angeles Regional Water Quality Control Board deemed Fishback “exempt” from waste water discharge requirements based on their investigation and onsite inspection in 2014.

Fishback has been ordered by Ventura County to remove “concrete and earth”—inert material (non-organic and does not decompose)—100,000 cubic yards of what the county claims is “illegal dumping” on less than one-half of an acre of the property.  Meanwhile, Fishback claims that this inert material reduces the risk of wildfires on land and was necessary to stabilize and protect his ranch property.

According to Peter Andl, the county has been totally “unfair” in their dealings with Fishback.   He went on to state that Fishback is being held in a “special holding” place separate from other inmates as by the judge’s orders.

A clerk for the Ventura County Hall of Records told the Citizens Journal that the records for Wayne Fishback’s case were not available for public viewing because the 42 volumes (dating back to 2006) were in Judge Jeffrey G. Bennett’s chambers.

“This is a fraud.  Everything the county has done is fraud,” said Fishback to the Citizens Journal before the “lock-up” order given last Friday by Judge Bennett.   “We don’t have constitutional rights.  I have done everything that I can do.   I used to have a net worth of $120 million.  My wife, Carol, is  now living with my son in Texas.   I am homeless.  In two more months, my ranch property will be completely lost.”

Fishback had to represent himself because he could no longer afford expensive attorneys.  Meanwhile, Fishback has a pending $200 million dollar lawsuit against Ventura County filed in Los Angeles federal court in 2018.  During his Friday court contempt hearing, Fishback said he was not able to get a public defender for a civil case.  Fishback’s “coercive civil” contempt to the Court case  is set to come back to the court again on Thursday, March 12th in Courtroom 21 at 9 a.m.

Typical vta county gov overstepping their boundaries. This guy deserves his land back. It is common practice to fill with broken up concrete and is not more endangering the environment than all the other concrete slabs like sidewalk and parking lots that are all over the county. On top of that he did do an environmental survey with the appropriate authorities and they ruled in his favor. This is blatant railroading for eminent t domain. This is exactly why everyone wants to leave california, this mentality of our officials that they are somehow not just above the law, they are themselves omnipresent in law is pervasive accross our once great state. This is truly pathetic, sounds like fish back wanted to grow crops and live out his life. God forbid he figured out a way to live his own life and provide for himself rather than capitulate to the system like the rest of us have to. Good for him, but he should have known better that when one nosey neighbor gets it in their head to make it their issue to mess with him, then the county gets involved and he loses everything he has ever worked for, including his freedom.

His land to use as he see fit ,I believe he is being unfairly targeted and I hope he wins the lawsuit….